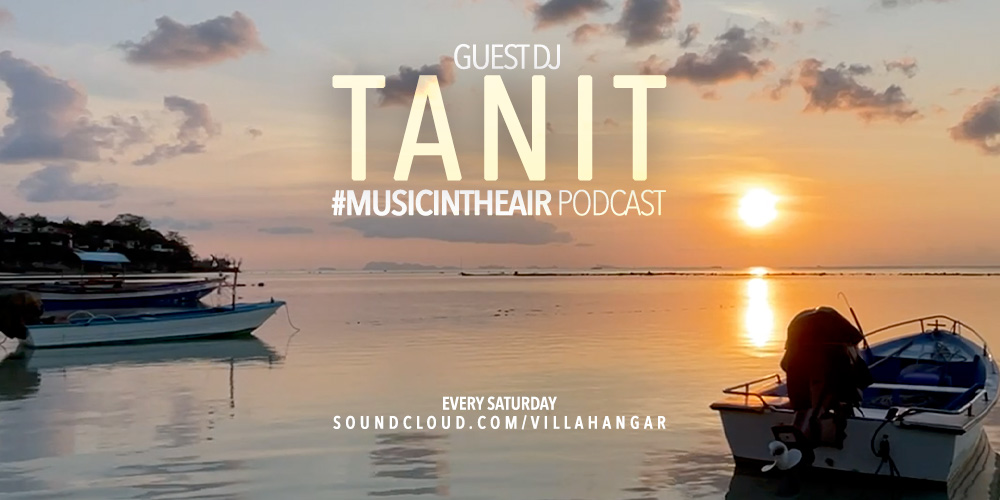 The musical orbit of villahangar’s artists continues to grow: this week the label welcomes a new guest of the #MusicInTheAir podcast:
the DJ and producer Tanit, born, raised and living in Moscow, capital of Russia.

Her musical journey “has been a long way! – she says – And I can’t say it in two words! Apparently, there always was another person hidden in me, who came out in one day! (Second thoughts) And the musical style is what I feel. I can’t reproduce what I don’t like! And most importantly, it’s the energy I give to the dance floor! People feel it and start wanting to hear you again and again.”

Resident of one of the most brilliant Russian festivals, the Odyssey Festival and frequent guest of the Gazgolder Limited Edition in Moscow and the Storytellers in Ibiza.

Influenced by the groove, her DJ sets are a whole story that takes listeners on a magical journey into the rhythms of Afro, Organic and Melodic House, although as she defines herself “still looking for her perfect sound as a producer”.

Tantit over time has scored remarkable numbers and beautiful releases: his releases on Go Deeva Records, Pipe & Pochet, Wired and other labels have been supported by the best DJs in the world, in particular the hits Se De Ritmo (Original Mix) and Kenyan Wedding (Original Mix) were included in the TOP 100 of the best-selling Afrohouse songs of Beatport of 2020 and a joint release with Simone Vitullo of Go Deeva Records, “Priroda – Original Mix” for more than two weeks was number one in the TOP 100 Organic House/Downtempo on Beatport.

In this regard, she says: “It usually happens like this… I’m finishing to work on a track and, as a rule, I already know which label it fits. If we are equal in this, then everything comes back.”

At the moment she is focused on several projects, such as some collaborations that will soon be revealed.

What could you tell us about Go Deeva Records and your collaboration with Simone Vitullo?

It was the label on which one of my first releases took place. It was important for me , because this is a label that is in the first place in the afro house genre on Beatport and I like all the music that is released there. The owner of this label Simone Vitullo, I think, saw in me the potential as a producer and artist and, soon, my other tracks came out on Go Deeva , which got into the top10 and occupied the 3rd and 4th lines there for a long time! After that, we decided to work together and our first release together was the track Priroda (Original Mix), which I started working on during pandemic and then we continued it together , lasted a week on the first line of the organic house genre on the Beatport. During this time , we managed to become friends and our new joint works will be published very soon.

How do you live now and have you experienced in the recent past this particular moment for humanity of epidemic? How did you make up for the lack of being able to travel for your inspirations?

Yes, this is a very relevant question!!! It was a very difficult period for all of us! For a long time I couldn’t believe what was happening and that it would last for a long time! For a while I felt lost, I couldn’t figure out what to do and how to move on! The only way out that I found at that moment was to immerse myself in writing new music. Now everything is more or less normalized and my schedule is very busy, which I’m very happy about. But still it’s not so easy at the moment, even to move between countries. And in Russia , for example, a new lockdown begins and it is not yet clear what awaits us!

What evolution do you think house music is experiencing on the international scene?

This is a difficult question for me! I can’t say for sure, but I’m sure something will change! Now everyone is in search of a new sound! The world, like us, doesn’t stand still. I hope, there will be new subgenres. Because, for example, I often come across the fact that the track is cool, but it’s not indie dance or melodic house, but something in between and the label doesn’t want to take it because it’s not in genre. And I would really like the experimental sound to find its place too. And , that’s when , the world of house music will play with new colors! I’m wating for it!

How were the months of July and August for you? Have you had any DJ sets? Restrictions permitting, do you have dj sets planned at the moment for the future?

The summer months were not bad. I’ve had enough gigs. Also, there have been a lot of tours lately. And when this interview comes out, I’ll be in Mexico.

You know very well the world of festivals. Given the difficulties of the pandemic of the past year, how do you deal with the issue and in what direction do you think the music world should move to overcome the impossibility of live events?

Now we all depend on the decisions of the governments of each country. In Russia, for example, due to the new lockdown, we again lose opportunity to hold events indefinitely. All artists and the whole industry suffer from this ! It would be better to do a covid free events, I think!