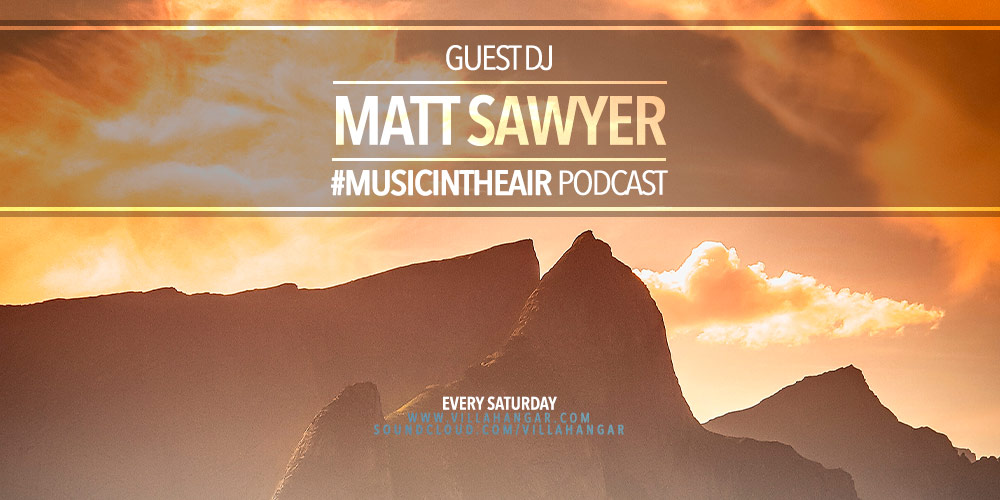 A very special host: Matteo Saverio Cacciola, this is his name, he is Villahangar’s creator, together with Andrea Pellizzari.

His is a recording project, named Matt Sawyer, born in 2015 together with the development of the label that, starting from deep house and embracing other genres such as lounge and downtempo, supports and spreads music of many talented and original artists all over the world.

Matt Sawyer approached the music world much earlier, already present for some time under the pen-name of Mavee. A change of name his, in order to represent a radical evolution of his artistic path, guided by the courage into experimentations and in the continuous research of sounds that, together with his passion for underground music, led him to undertake new stimulating paths.

To characterize him, progressive-melodic sounds with ethnical hints and nuances, steel battery and much 90s culture: Matt expresses himself musically towards this direction, giving birth to a recognizable and much researched sound, which allowed him in the summer of 2019 to finish the EP Various Artists Four to the Floor 14 of Dynamic Music with the track “Tribe”.

Many of his projects, published or not, are supported all over the world especially by an artist such as Solomun but also by djs such as Kintar of Sudam, Guy J who supported “Scala”, track included in the Sunday Morning EP (2020 Villahangar), FNX Omar who selected Majestic (2020).

But not only: speaking of Sudam, in January 2020 “Afrodisiaco” and “Kenya” were released for the labels Argentina / Ibizenca and reached Beatport’s Afro House TOP100, reaching the New Releases TOP10.

Villahangar is, despite the difficult moment, in its full development, between new important releases and always different projects with new and consolidated artists. The contribution that Matt gives is fundamental, for just over two years he has been running the #MusicInTheAir Podcast at 360 degrees and, together with Chris Leon of Everything Counts, he makes scouting activities, and he is also producer and creator of the contents of villahangar.com Blog.

In the past year the label is also living a new and precise direction, thanks to Matt, together with Andrea Pellizzari and with the collaboration of Chris and Double Drop, one of last October’s Various Artists “Underwater” protagonists with his involving Afro House, together with Socko’s sophisticated downtempo, going through Sounds Shapes’ groove and Diass relaxing mood.

The mission is to be recognized not only for the sound but overall for the importance that he wants to give to the artist and to his music, with a future that allows to discover and taste even more all of the artists from “Underwater” in individual EPs to come out soon.

Going back to the recording discourse of today’s guest, his activity is tireless: in 2020 were released Voyage EP on Kinesen (Switzerland) and Epic Storm / Rollercoster on Claps (Italy), which contain more electronic tracks which fit perfectly to the dancefloors. On the other hand, with Maputo’s label My Other Side Of The Moon (Mozambico) was released Majestic EP with the AfroHouse sound and the experimental song “I’m a Dreamer”. The EP scored over 250.000 reproductions on Spotify and the songs were in Beatport TOPP100 and in many editorial rankings receiving great feedbacks.

During the same year, he was present on Sudam’s Oranic V with “Kummahe” and in the progressive remix of the track “Biokarma” of the Switzerland band Freaky Farm.

But also with “Chord” and “Albatross” with which he debuted on the Russian Label Hey, location!, with “Psuco Drama” and “Roky” on District 27 Records, Hey, location!’s Techno label. To conclude, last year he also remixed the song from Double Drop feat. 808DNa “Until we love again”, released in October on My Other Side Of the Moon.

Everything Countr’s remix of “Mbodiene” was recently released in 2021 on MoBlack Records, currently in Beatport Afro House’s TOP100 and the song of the artist most downloaded on Traxsource, and two electronic tracks on BornToLive, “Spill The Tea” and “Simplify”, supported by Solomun.

But also his Knowhat’s “Tribalistars” remix branded Villahangar, played by Black Coffee in the Keinemusik Radio Show, but also inserted in the Spotify playlist created by the Keinemusik crew, and played by Brina Knauss on M2O in the program DJMAG Session.

Only the official dates of the next projects are missing, but we anticipate that Matt Sawyer will release two songs on Sound of Silence, an EP with Everything Counts and Double Drop on Villahangar and Could Song’s.

How did this collaboration with Knowhat start?

With Giovanni (Knowhat) the collaboration was born through the label. With him we firstly started to work on a promotional discourse, together with Michele Giuffrida (Miki J), during Diass’s release “Bloom Together” on Villahangar.

How was this remix born?

When we received the track Tribalistars in order to evaluate the release on Villahangar, I was very inspired by the drums. I already had in mind a remix that could overturn the mood.

What tools did you use to create this track?

How do you foresee your summer, both in your everyday life and from an artistic point of view?

I cannot foresee it in this moment, it is a moment in which there is nothing certain, especially on the artistic point of view, but I hope to be able to enjoy a time at the sea, relaxing together with the people I love.

What are your hopes for your artistic future at the moment?

Do you have other collaborations, productions, releases at this time or in the near future?

The Semplify EP was just released on the label BornToLive, which contains “Semplify”, track supported by Solomun, and “Spill The Tea”.

I am also preparing for another release on Kinesen, Parsifal and Tommy J’s label, two Italian/Switzerland guys very smart with whom I already collaborated in the past. And then there are many projects that as of now I do not want to anticipate, but they will be little dancefloor treats, that I keep for the summer hoping to be able to listen to them and play them on the dancefloor.